Stress can be detrimental to a person’s health on all levels. Each and every bodily system seems to be effected on so many levels. The connection between the heart and cardiovascular system and stress has been well documented and, now, is widely known to the general public. But what about the connection between stress and the digestive system? How much do we know about it?

We know that stress can cause the esophagus to spasm. 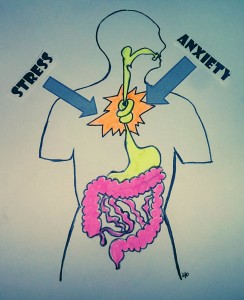 That same stress that can cause the esophageal spasm can shut down the mill action of the stomach, in turn, causing nausea. The stomach lining is filled with nerve endings which are constantly sending information back and forth from the brain. It has been found that some neurotransmitters are present in a higher concentration in the digestive system than anywhere else! This nervous system network, now referred to as the enteric nervous system, has its own nerve plexi and sends reflexive information to and receives it from the brain, independently of the divisions of the Autonomic Nervous System (ANS).

Knowing this, and doing things to prevent the effects of stress from ravaging one’s digestive tract, can be quite different matters. For example, I have had trouble swallowing for as long as I can remember. As a kid, food would get stuck in my throat routinely. During periods of high stress and anxiety, it would become worse. Dinners where arguments ensued would just produce pain. In fact, just a couple short months ago, I found myself in a position where I suffered the consequences of not “practicing what I preach.” I was at my “real world job,” and I ended up working alone. I was hoping to stay ahead of the game by working and eating at the same time. However, upon my first bite of chicken, I found myself choking. After a brief flash of my life before my eyes, the real panic set in. You see, I am the emergency responder on my shift. I am supposed to give aid to others in a situation such as this. What in the world was I supposed to do for myself?

I threw myself over the back of a chair. This moved the bite of chicken, but it became lodged in my throat. Therefore, no water, food, etc could get down and the chicken would not come back up, either. I finished my shift, in pain, went home to see my children off to school and then drove myself to my doctor’s office. MY family doctor, even though he knew I did not want to go, sent me on to the emergency room of the local hospital. There, they could not offer any more aid. A surgeon had to be called in. Three hours later, I was the recipient of an esophageal dilation. While I realize the necessity of the procedure, I do not suggest anyone signing up for it unless absolutely needed.

-PHYSICAL
The body is producing a very real reflexive action to outside stressors – the reaction being the constriction of the digestive tract. This constriction can also produce the slowing and/or stopping of the churning action of the stomach, causing a feeling of nausea. These stress reaction have been said to set up situations where other digestive ailments can be encouraged (i.e. certain types of ulcers, irritable bowel symptoms, hiatal hernia, etc)

-EMOTIONAL
Your emotions are causing you to feel like you are choking. Feelings of hopelessness, anxiety, fear, grief, sadness, turmoil, etc can “stick in your throat” can give you a feeling you “cannot bear to swallow.”

-ENERGETICALLY
The solar plexus area (the area behind the stomach is considered to be the third chakra, called manipura. This is the energy center that governs the relationship of the physical to the spiritual. The color associated with this energy center is yellow. Sitting at about the diaphragm’s location, this chakra controls the “as above, so below” philosophy. When the energetic self is provided for both physically and spiritually, manipura is generally well fed. When there is a discrepancy, there can be problems in the area.

Louise Hay says that the metaphysicla connection lies in the feeling of an inability to speak up for oneself, stifled creativity and/or swallowed anger.

First and foremost, one should look at the way in which he or she eats.

Enjoying a meal should be done with joy. Removing the stress from the eating experience goes a long way to reducing the amount of pain produced from the action of eating. As in the picture, never eat angry. It can produce an angry amount of pain via indigestion. Take time to chew your food. Chewing your food gives the tongue time to taste it. It increases the time spent absorbing the flavors and can increase satiety. This is the feeling of satisfaction created when we eat. Throwing one’s food down and not chewing decreases satiety. Drink sips of water to proper moisten the food so the bolus can sufficiently slide down the digestive tract.

Relaxing teas can help reduce the anxiety one might be experiencing. Chamomile works great for some as an after dinner relaxation drink. Others prefer the relaxing qualities of peppermint tea. Peppermint is quite relaxing to the digestive tract. This very quality is why peppermint candies are offered at restaurants upon the diner’s exit. Rosemary, anise, fennel and other carmatives (means they relax the gut muscles allowing burping and the passing of gas), may be helpful as well. *NOTE: these types of teas are not encouraged by gastroenterologists (medical doctors specializing in the G.I. tract) for those suffering form acid reflux.

Adding an affirmation like, “Its okay to make noise; I express myself freely & joyously; I speak up for myself with ease; I express my creativity; I am willing to change,” may help to deal with the stresses and relax the tension.

Reiki has been shown in some studies reduce stress, much in the same way as mediation, biofeedback, and other techniques. Find one that works for you. Yoga, and Tai Chi, can be thought of as meditation in movement. They, too, have been helpful to reduce stress.

Flower essences are thought to help heal the emotions that lie under the physical ailments one might be feeling. A blend called Rescue Remedy by some companies (Distress Remedy , can help with immediate feelings of anxiety, or impending doom. Investigate these remedies and find one that works for you. Sometimes, finding one that builds one’s strength, or releases the anger, so that creativity and mobilization to change one’s position in life, a particular situation, etc can be employed.

Essential oils that lift the spirits, such as citrus blends, and lavender can calm the G.I. tract. They can be diffused during the meal time and throughout the day to enhance one’s ability to relax.